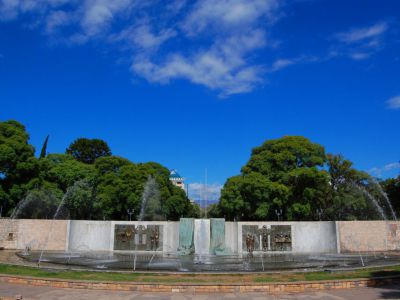 Plaza Independencia is the main square in the city of Mendoza, it represents 55,000 square meters of green space, creating a perfect place for rest and recreation. The square features many rare and beautiful trees and plants, as well as an incredible fountain with a stunning monument, called “Frieze of Independence”. It depicts several scenes- the first one is an indigenous woman, mounted on a horse and carrying a crucifix in her hand, a symbol of evangelization. The next offers a dramatic view of the oppressed man, who turns his back with his hands tied up; the following scene shows the same man set free. There are also murals that symbolize family, immigrants labor and culture, leading us along the way to independence. This composition gives homage to the immigrant labor and efforts that raised this province, and finally addresses culture as a great liberating force, implying, that there is no independence without culture. The Plaza Independencia also houses the small Teatro Municipal Julio Quintanilla and the Municipal Museum of Modern Art.
Image Courtesy of Flickr and Justin Ornellas.