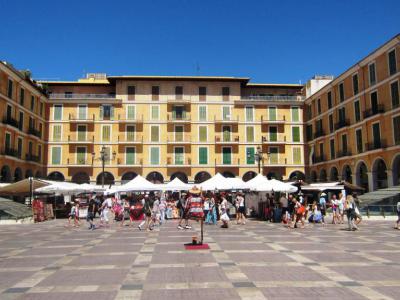 The old convent of San Felipe Neri in Palma de Mallorca was torn down in 1823. That was a good thing. Few people, if any, were nostalgic for the Inquisition and the old convent in the city had been essentially Inquisition Central. Ten years after the convent and associated buildings were pulled down, work on the Main Square began.

Work continued, off and on, until the 20th century. When completed, the square featured an underground car park, businesses and commercial galleries.

The square is a big rectangle. Porticoed three and four-storied houses line the edges. The square is close to the Churches of San Miguel and Santa Eulalia. Other important buildings nearby include the Town Hall and the Main Theater. The streets of San Miguel, Jaime II, Colon and Sindicato stretch from the Main Square to the city limits.

Restaurants, cafes, art galleries and street performers abound in the square. An artisan market is held every week. Streets leading out of the square are also jammed with cafes and shops. The square tiled and closed to motor traffic. Main Square is a social and cultural watering hole for visitors and locals alike.
Image Courtesy of Wikimedia and Martin Furtschegger.