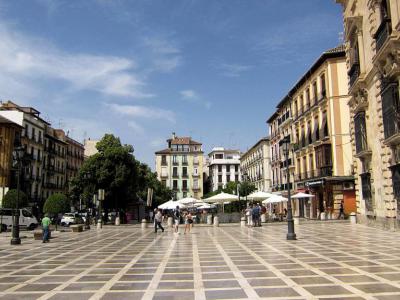 Despite its name, the Plaza Nueva (New Square) is one of the oldest squares in Granada. In former times the plaza was the scene of bull fights, tournaments and an occasional execution, definitely a spectator event. Before it was a square, however, it was a bridge. Called the Bridge of of Loggers, it spanned the River Darro.

The square is centrally located and is an ideal starting point for explorations on foot. Walk from the Puerto Granadas to the Alhambra forest to the Alhambra, a 15 or 20 minute journey. Exit by way of the cobbled street on the left of the Church of Santa Ana to the River Darro. Perhaps go up Elvira Street to the Mirador San Nicolas and the Albaicin.

The main attraction of the square itself is the High Court of Andalusia. The court building was formerly the Chancilleria Real (Royal Chancellery). Construction of the Chancellery began in 1530. In the rear of the building a prison, handy to the court. The square is also home to the Arborea Flamenco. Cafes, flamenco, ole!
Image by Martin Furtschegger on Wikimedia under Creative Commons License.