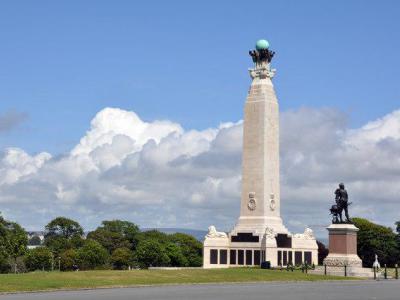 Plymouth's Naval Memorial was unveiled on July 29th, 1924 to commemorate those members of the Royal Navy who fell at sea where no memorial can be bestowed. It was decided that replicas of the Memorial, designed by leading European architect Sir Robert Lorimer, would be placed in the other two ports of the UK - Chatham and Portsmouth. At the entrance to the memorial are figures of the Greek gods, Neptune and Amphitrite, with sea horses.
Image Courtesy of Wikimedia and Mick Lobb.