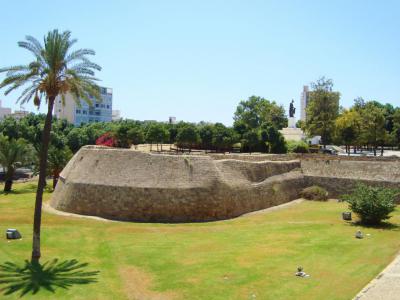 The first walls were built in the 14th century. When Cyprus became part of the Republic of Venice in 1489, the Venetians planned new fortifications, but their plans were delayed. Ottoman expansion inspired the Venetians to rebuild the city's walls in 1567. The Venetians also added an 80-meter-wide (262-feet) moat.

The walls were still under construction when the Ottomans invaded in 1570 and breached Podocattaro Bastion's walls. The Ottomans left thousands of soldiers in Nicosia and repaired the walls.

Nicosia's Venetian walls are circular and have eleven bastions and three gates. The bastions were named after members of the Italian aristocracy who donated funds to build the walls. Today, the Podocattaro Bastion is home to the Liberty Monument.

The walls feature innovative building techniques, such as improving the gate's protection and the wall's ability to withstand cannon fire.

Today, the walls are a much-visited tourist attraction. In addition, the dry moat is now used for sports fields, car parking, exhibitions, and a sculpture exhibition.
Image Courtesy of Wikimedia and AncientNicosia.