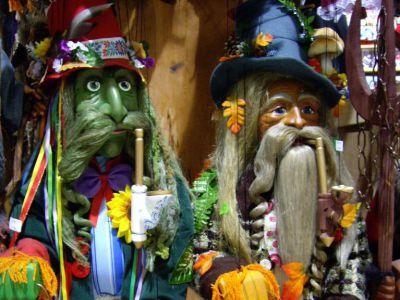 Puppet-making is more than a pastime in the Czech Republic. Itʼs a craft that dates back to the Middle Ages, first making a recorded appearance around the time of the Thirty Yearsʼ War. Czech puppeteers toured Europe in the 18th century, while at home puppet theater become a highly evolved art form, often with a political subtext during the turmoil of the 20th century.

The National Marionette Theater in Prague stages a puppet production of Mozartʼs Don Giovanni that has been packing in crowds of tourists for years. What all this means for visitors is an astonishing variety of marionettes that make great gifts for kids, from small kitchen witches to whopping winged three-headed dragons.

You will find one of the best selections at Pohádka in Old Town, which is not shy about attracting the tourist trade – there are plenty of commercial marionette characters like Popeye, Charlie Chaplain and the popular Czech icon Good Soldier Švejk. But alongside those are a charming selection of devils, angels, princesses and brides, dwarves, sprites and other fairy-tale characters in sizes well-suited for small hands. Prices vary by size, starting at 295 crowns for small figures and up to 4,995 for large ones.