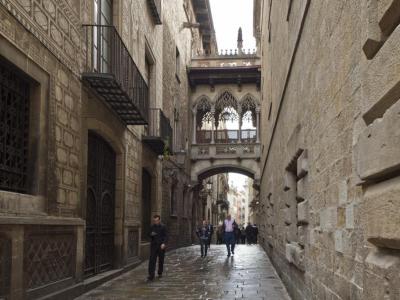 Although it may seem like an architectural work dating several centuries, the Pont del Bisbe was actually built in the year 1928 by Catalan architect Joan Rubió, a keen disciple of Antoni Gaudí, with whom he collaborated until the year 1905 on different important projects among which La Sagrada Familia, the Casa Batlló, and the Parc Güell.

Despite being relatively modern, the bridge blends in seamlessly with the architecture so prevalent in the wonderful Gothic Quarter, and connects Palau de la Generalitat to La Casa dels Canonges (Canons House). The decor is inspired by the forms of Flamboyant Gothic, making it one of the most photographed sights in Barcelona.

Tip:
If you want a good photo-op, visit in the morning or late afternoon.
Image by trolvag on Wikimedia under Creative Commons License.