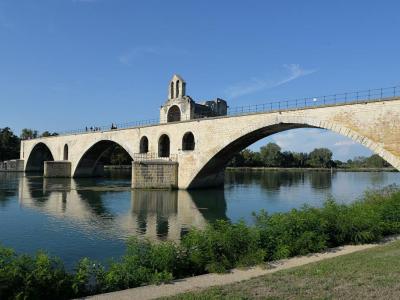 But, actually they danced below the bridge, not on it. Over the years, they worked their way up, the handsome men, the lovely women, the soldiers, the babies, the good friends, the musicians...so the song says, around and around. What does it mean?

The song and the bridge are wrapped in mystery. The bridge referred to in the song, Le Pont d'Avignon is actually Pont St Benezet. St Benezet (1165-1184) was an illiterate shepherd who became the patron saint of bridge builders, and this is how he did it.

In 1177 he told the bishop he had had a vision wherein he was told to build a stone bridge across the Rhone. The bridge was to be at a point where the force of the river was greatest. The bishop, not wanting to defy Heaven, approved the project and work began. Benezet's holy mission was confirmed by no less than 18 miracles of healing.

The stone bridge that replaced Benezet's damaged bridge in 1234 had 22 arches and 21 piers and was 980 yards long. The arches were low and were liable to collapse when the river ran too high. Only one chapel, St Nicholas Chapel, and four arches remain of the bridge. The bridge was listed as a Historical Monument in 1840.
Image Courtesy of Wikimedia and Calips.