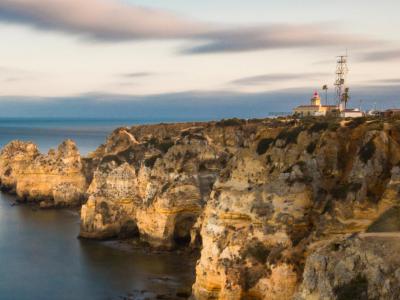 An accident happened. It happened millions of years ago in the Miocene period. The remains of that accident can be seen today near the city of Lagos. There is a cape called Piety Point (Ponta da Piedade) extending into the sea and surrounded by rocky cliffs up to 65 feet in height. Locals revere and respect it. Tourists love it.

While the accident went on, waters covering the area of the point receded. The promontory was exposed and the rocks eroded into huge fantastical shapes. The area is truly a paleontological treasure trove. There are fossils of corals and marine life long extinct, including formidable looking shark's teeth.

Ancient Mediterranean people always thought of the sea as a god. Piety Point has traditionally been considered a sacred place. Bronze Age artifacts continue to be collected from the cape on land. Underwater, bits of the Roman presence may be found in the form of ruins and coins.

The hermitage of Our Lady of Piety (Nossa Senhora da Piedade) was built on the cape in the 16th century. There is a ceremonial path from the city of Lagos to the point called the Via Sacra. Along the way marks of the stations of the Cross are still standing.

The importance of the cape did not escape the military. It was a point of surveillance and high ground overlooking approaches from the sea. The army installed a battery there in 1663 and it did not come down until 1821, after Napoleon's busy time had ended. The chapel was demolished in 1913 to make way for the lighthouse.

In 2015 the Huffington Post visited 10 beaches around the planet. Piety Point was chosen as the favorite, based on its natural beauty and rock formations. Lonely Planet cited it as one of the ten natural wonders of Portugal.

Why you should visit
Are there any romantic, exotic places like this out your way? Are there perfect beaches, crystal clear blue waters, mysterious caves? A seaside adventure you'll never forget? No? Que lastima! Exploring by boat is recommended.

Tips
From Lagos there are one hour boat tours. The Piety Point can also be reached by train (slow) from Lagos.
Image Courtesy of Flickr and Theo Crazzolara.