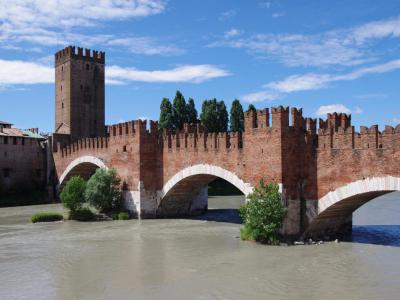 Ponte Scaligero is a three-arch bridge that spans the Adige River. It was built in 1375 or 1376 for the Scaliger family who wanted to use the bridge as an escape route from the Castelvecchio to the river. The architect was most likely Guglielmo Bevilacqua.

The overpass spans 120 meters and connects the city to the road that leads to Tyrol. It is one of the most photographed viaducts in the city and a popular transport path for pedestrians. As with many other structures, the original bridge was destroyed by the Germans during World War II. Fortunately, it was reconstructed in the 1950s using many of the original salvaged parts.

The upper part of the bridge is red brick, while the lower part of it is white marble. Local legend says that Cangrande II della Scala awarded the designer a sword, that belonged to St. Martin, for his efforts. The bridge resembles a small fortress during the day and is absolutely stunning when viewed at night.

Why You Should Visit:
Stunning views up and down the river and some wonderful city skylines to be photographed. A must-see part of medieval Verona.

Tip:
Explore the numerous staircases and ramparts – many great photos can be taken on the fortified walls.
Try to visit by day and again after dark when the bridge is beautifully lit.
Image by Jakub Hałun on Wikimedia under Creative Commons License.
Sight description based on wikipedia