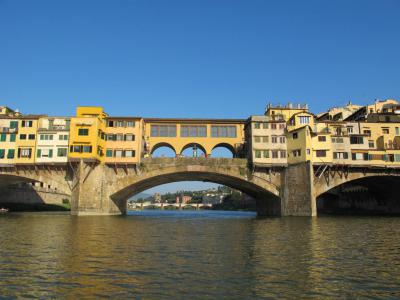 Ponte Vecchio (or The Old Bridge) in Florence appeared in documents for the first time in 996. Of all the six local bridges crossing the river Arno, it was the only one spared by the retreating Germans in 1944. Today, this Medieval stone arch bridge stands testament to what a monarch can accomplish in terms of lasting legacy.

Still lined with shops, as was commonplace in the Middle Ages, this bridge is presently occupied by jewelers, art dealers and souvenir sellers, whereas initially, its tenants were all butchers who habitually dumped rotten animal carcasses straight into the river below. That was the case until the 16th century when Grand Duke Fernandino I de' Medici demanded that all the butcher shops were replaced by goldsmiths – thus not only did he rid the bridge of its rotting stench, but also turned it into the golden-most spot in Italy.

If looking at Ponte Vecchio from a distance, one can notice there an upper level, which is in fact a kilometer-long tunnel linking the Palazzo Pitti with Palazzo Vecchio and using which, back in the day, Duke Fernandino could walk freely between the two palaces whenever he felt insecure in public. Although the passageway is now closed since 2016 for safety reasons, the Uffizi Gallery has announced plans to re-open it by 2021.

One of the legends surrounding the bridge is it that the economic term “bankruptcy” originated right here when a money-changer who couldn't pay his debts, in punishment for his insolvency had his trading table physically broken by soldiers, so he could no longer sell anything. The table was called "banco", and thus the term "bancorotto" came into being.

Today, the Ponte Vecchio is a pleasant place to walk in the evening, if not packed end to end with thousands of tourists traversing the river over its cobblestones.

Why You Should Visit:
The sunset light here makes it a special spot to cross or watch from afar. The morning light on the river is just as gorgeous a sight to behold and, if you come here early in the day, you may stand a pretty good chance of having this “old bridge” all to yourself!

Tip:
If you do cross the bridge, be careful with your surroundings to avoid getting pickpocketed.
Image by sailko on Wikimedia under Creative Commons License.