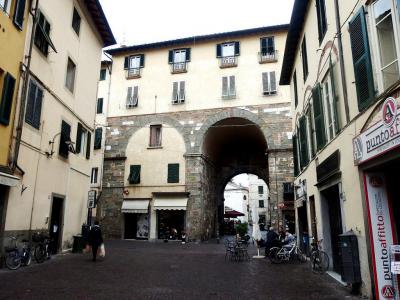 Porta dei Borghi is the oldest gateway in the medieval Walls of Lucca. It faces north and was built between 1198 and 1265; the gate was almost completely demolished during the construction of the Renaissance walls. The only other gate of the original four, remaining from the 13th-century circle, is Porta San Gervasio located at the top of Via Santa Croce.

Today Porta dei Borghi marks the end of Via Fillungo, and is incorporated in the more recent, 16th-17th-century fortification, not far from Porta Santa Maria, which in the second half of the 16th century assumed the role of main entrance to the city from the north. The gate has a single central opening (once there were two, but one is now walled up) with two towers on either side.

The two towers, in gray sandstone with white limestone decorations, originally had battlements and a walkway that linked them at the top. Both towers and the upper part of the gate are currently used as private homes.

The gate has a wide entrance, eight meters high, covered by a round arch. Inside there is an ancient fresco, framed by a lunette, depicting Madonna with the Child, restored in 2008 by the Municipality of Lucca.
Image Courtesy of Wikimedia and Palickap.
Sight description based on Wikipedia.