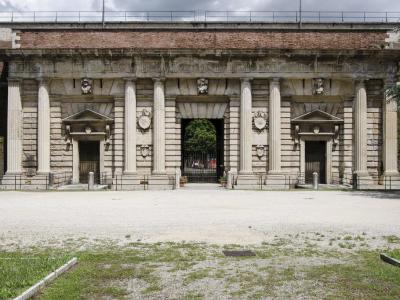 The Porta del Palio is a very famous gateway that is decorated with heroes of war. It is located in the city of Verona. It was designed by Michele Sanmicheli and completed in 1561. It is named after the race that passed through the area. It is located near the Port St. Maximus and is one of the most recognizable and beautiful gates in the city.

If you stay overnight in the city and want to enjoy Verona’s most famous gateway and other attractions, it is recommended to stay at the Porta del Palio Hotel. It is located close to the city’s center and allows you quick access to other attractions such as the Arena, the Mura di Verona, the Galleria d'Arte Mercato, the Museo Della Radio d'Epoca, the Porta del Palio, the San Luca, the SS. Nazaro e Celso, the Studio la Città, the Palazzo Verità Poeta, and the Museo degli affreschi. Tourists can visit 24 hours a day seven days a week.
Image by Lo Scaligero on Wikimedia under Creative Commons License.