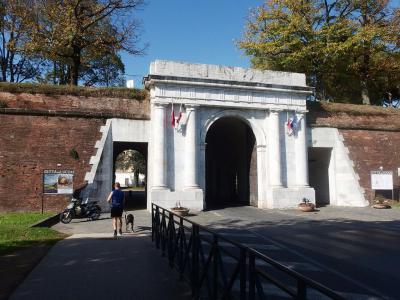 Porta Elisa is an eastward gate in the Walls of Lucca. The original plan for the Walls did not envisage any gate on the eastern side of the city – for fear of attack from Florence. However, during the Napoleonic domination, when the threat of invasion from the Florentine dominion was none, it became necessary to obtain direct access to the road which led to the important cities of the Lucca state, such as Capannori and Villa Basilica, and further afield towards Pescia, Montecatini Terme, Pistoia and Florence.

The gate was constructed between 1809 and 1811 and, unlike its predecessors, was not dedicated to a saint (according to the strict secularism of the time), but instead was named after Elisa Baciocchi Bonaparte, Napoleon's sister, who against the will of her brother had married the fallen nobleman Felice Baciocchi, eventually the Prince of Lucca and Piombino.

The gate consists of three arches with a modest ornamentation in Neoclassical style with Doric entablature supported by two pairs of Tuscan columns. A low parapet is the only part of the building that slightly surmounts the level of the Walls. The gate's white marble masonry starkly contrasts the red bricks of the Walls.

From the inside the gate was to appear as a triumphal arch, marking the outset of a new road to the city center, called Via Elisa, which was originally intended to gut the ancient quarters of the city by demolishing the Romanesque Porta San Gervasio and creating a large arcaded street towards Piazza San Michele. However, following the fall of the Napoleonic Empire, the demolition plans were aborted, with only one stretch of Via Elisa completed with the ensued destruction of medieval convents of the Carmine and the Capuchins.
Image Courtesy of Wikimedia and Palickap.
Sight description based on Wikipedia.