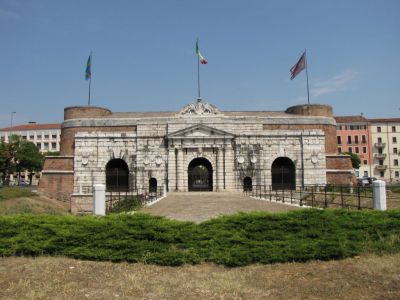 One cannot think of Verona without visualizing its many gateways, bridges, and towers. In fact, the city is well known for its spectacular military architecture. Porta Nuova, or new gate, was built by architect Michele Sanmicheli between 1533 and 1546. The sideways were added by the Austrians in 1854.

The gate was constructed to encourage access to the city and marks the beginning of the historical section of Verona. It is located along the Trinita Bastion and features a sculpture of Jupiter’s head. It is also one of two remaining gates in the city. The train station with the same name is located close by and serves thousands of commuters every day.

Verona is a bustling city that is jam packed with many things to see and do. Best of all, many of those attractions are located near the Porta Nuova. Some of the many other attractions you can enjoy when you visit the gate include the Mura di Verona, the Galleria d'Arte Mercato, the Museo Della Radio d'Epoca, the Porta del Palio, the San Luca, the SS. Nazaro e Celso, the San Nicolò, the Arena, and the Palazzo Bevilacqua. The gate is open 24 hours from Sunday to Saturday.
Image by Jacopo Prisco on Wikimedia under Creative Commons License.