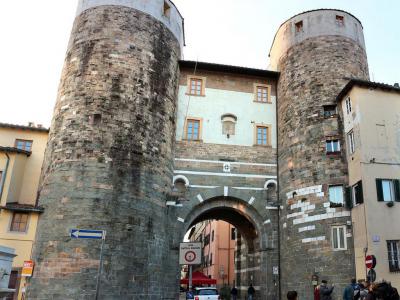 Porta San Gervasio is one of the four gates from the 13th century that once formed part of the Walls of Lucca. It was almost completely demolished during the construction of the Renaissance walls (the latter still visible today); the only other similar gate still in place is Porta dei Borghi, located on Via Fillungo.

Also known as dell'Annunziata (the Annunciation gate), Porta San Gervasio was completed in 1255 and was dedicated to Saints Gervasio and Protasio.

The gate has a wide opening, eight meters high, covered by a round arch; the inner lunette carries the image of Madonna and the Child, with two kneeling Saints (probably Gervasio and Protasio) and two Angels uncovering the curtain, as well as a fragment of San Giovannino at the foot of the Virgin.

The two towers, made of gray sandstone with white limestone decorations, originally had battlements and a walkway connecting them at the top. Back in the day, the gate had a drawbridge over a moat; the latter is still preserved and runs opposite Via del Fosso.

Today the two towers are used as private residences. In the top left one, seen from Via del Fosso, Italo Meschi (1887-1957), the guitarist, poet and anarchist-pacifist once lived; while in the right-hand tower, his cousin, painter Alfredo Meschi (1905-1981), had a studio.

The gate underwent restoration in 2006-2007.
Image Courtesy of Wikimedia and Sailko.