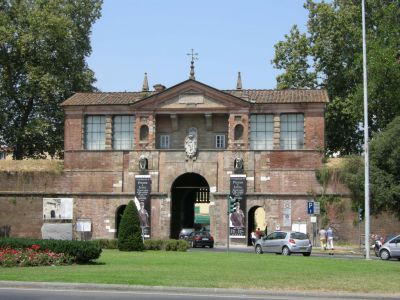 Porta San Pietro is one of the oldest gateways in the historical Walls of Lucca. Designed by the military engineer Alessandro Resta, it forms part of the Renaissance walls and was built in 1565/66 to provide entrance to the southern part of the city. Presently, it is the nearest gate to the train station.

Back in the day, all non-residents entering the town were obliged to register and surrender their weapons, except swords. Those transiting the city could retain their guns but were escorted by armed soldiers.

Porta San Pietro consists of three entrances surmounted in the center by a shield with the coat of arms of St. Peter and the inscription "Libertas", which is the motto of Lucca. On the sides, guarding the entrance, there are two magnificent stone lion figures, placed inside the niches which once served as openings for chains for lifting the drawbridge.

During the 19th century, the gate underwent massive alterations, including the addition of two pedestrian side arches. The central passage has been reserved for transport traffic.

To date the Porta San Pietro has retained its original wooden studded doors and portcullis. Another notable feature is the elegant classical tympanum. As for the space on the ground level, it is currently used as offices and a warehouse for one of local historical reenactment associations.
Image Courtesy of Wikimedia and sailko.
Sight description based on Wikipedia.