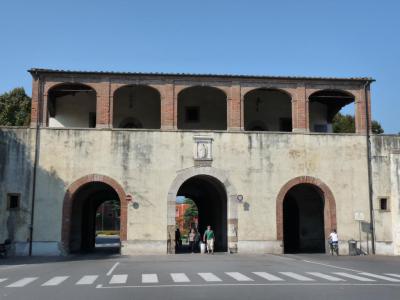 Porta Santa Maria is a northern gateway in the Walls of Lucca. It was built between 1549 and 1592 as part of the Renaissance walls, and was designed by architect Ginese Bresciani and built by Michelangelo Gabrielli. The gate is dedicated to Virgin Mary – the marble statue of Madonna is found in a niche outside the entrance.

Originally, Porta Santa Maria had a single entrance; the two side openings were added later.
On both sides of the gateway there are several statues, each representing a panther – the symbol of Lucca. Under the central arch there are two frescoes depicting the Annunciation, featuring Archangel Gabriel on the one side and Madonna on the other. At the center of the internal façade is the marble bas-relief depicting St. Peter along with the inscription "Libertas" underneath, the ancient motto of the city.

From 1883 to 1932 there had been a tram line operating with the terminus of Lucca-Ponte a Moriano outside the city. In 1884 the line was extended with a new terminal station at Porta San Pietro, effectively passing through the Santa Maria gate. Today, the central passage of the gate is solely pedestrian, with the side openings reserved for transit of vehicles.
Image Courtesy of Flickr and Allan Parsons.
Sight description based on Wikipedia.