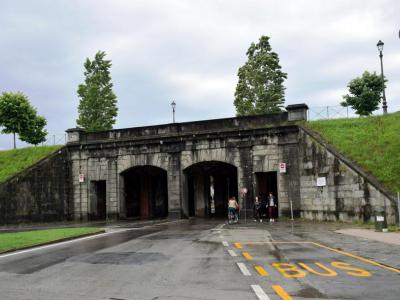 Porta Sant'Anna, officially known as Porta Vittorio Emanuele, is one of the gates in the Walls of Lucca – colloquially referred to by locals as the "hole" of Saint Anna, after the nearby church of the same name.

The gate was opened in 1910 to serve increased motorized traffic in the western part of the city in view that the nearby Baluardo (bulwark) San Donato, erected in the 17th century for defensive purposes, had no longer been adequate to the task. It was therefore decided that the new entrance would have two arches, in line with the enlarged via Vittorio Emanuele, which was to replace Via di San Paolino as the main westward artery.

In order not to spoil the view of San Donato, a favor was wisely given to two rather simple carriageways (instead of some superstructure) flanked by two pedestrian passages below the bull that separates the shoe from the parapet of the wall, leaving its continuity intact. At the center of the gate, between the two central passageways, the city's marble coat of arms can be seen. The arches dividing the compartment, created in the thickness of the walls, are in exposed brick.
Image Courtesy of Flickr and János Korom Dr..
Sight description based on Wikipedia.