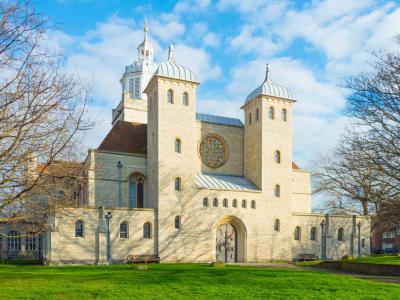 The Cathedral Church of St Thomas of Canterbury, Portsmouth, commonly known as Portsmouth Cathedral, is the Church of England cathedral of the City of Portsmouth, England and is located in the heart of Old Portsmouth. It is the seat of the Bishop of Portsmouth. Around the year 1180 Jean de Gisors, a wealthy Norman merchant and Lord of the Manor of Titchfield, gave land in his new town of Portsmouth to the Augustinian canons of Southwick Priory so that they could build a chapel "to the glorious honour of the martyr Thomas of Canterbury". This chapel was to become in turn a parish church in the 14th century and then a cathedral in the 20th century. Between 1902 and 1904 the church was closed for restoration work to be carried out. In 1927 the Diocese of Portsmouth was created. In 1932 Sir Charles Nicholson published plans to enlarge St Thomas's. In 1939, due to the outbreak of World War II, work on the extension scheme stopped, and was not recommenced until 1990.
Image by JohnArmagh on Wikimedia under Creative Commons License.
Sight description based on wikipedia