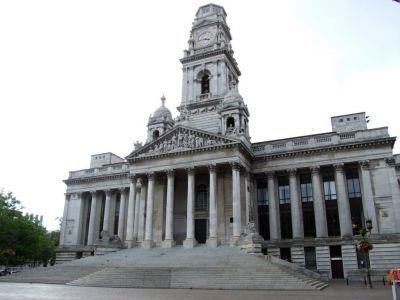 Portsmouth Guildhall is the biggest events venue in the Hampshire city of Portsmouth. The building, completed in 1890, was designed in the neo-classical style by architect William Hill, who had earlier been responsible for the design of the town hall in Bolton. Local Architect Charles Bevis in partnership with Hill directed the construction, Hill died before the completion of the building with Bevis adding to the design.

The building was originally called the Town Hall, but on 21 April 1926 it was announced that Portsmouth would be raised to the status of a city and the town hall was renamed the Guildhall. The Guildhall has a capacity of up to 2000. It is located in the city centre of Portsmouth, very close to the Portsmouth and Southsea railway station.

On 10th January, 1941, during the Second World War, the building was hit by incendiary bombs and was gutted. The interior and roof were totally destroyed, with just the outer walls and tower remaining, albeit fire-damaged. The building was rebuilt after the war for £1.5 million, using war compensation funds, and on 8 June 1959 Her Majesty the Queen performed the re-opening ceremony. However, the interior was changed from the original and the external style is missing much of its original ornateness, especially the dome above the clock and the finials atop the balustrades around the roof.
Image by Christophe.Finot on Wikimedia under Creative Commons License.
Sight description based on wikipedia