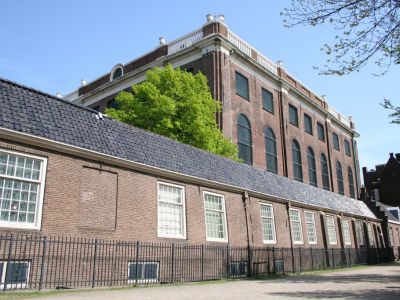 The option of enjoying religious freedom is what brought a majority of Jews from all over Europe to Amsterdam. The city has over the years earned a reputation for being tolerant and offering equal rights to individuals of every community.

The Jewish community first took refuge in Amsterdam in the late 15th century. Fleeing from Spain and Portugal, they enjoyed religious freedom in the Netherlands like no other. During that time, the Dutch Republic was also at war with Spain. To avoid further mishap, the refugees called themselves Portuguese Jews.

The community grew at a fair rate and about a century later in 1665, the Portuguese Synagogue was built. Also known as the Esnoga, the building back then was the largest synagogue in the world, having drawn inspiration from the Temple of Solomon in Jerusalem.

Seemingly untouched by the hands of time, the Portuguese Synagogue overlooks traffic on one of Amsterdam’s busiest streets. Not much has changed in the design and interiors of the structure since the 17th century, and one can still appreciate the antiquities and grand interiors that time has no effect on. After dark, about 1000 candles light up the entire space (there is no electric light).

Why You Should Visit:
To witness the second-oldest Synagogue in continuous use in Europe.
The entrance fee also allows access to the Jewish Historical Museum across the street.

Tip:
Don't skip going the various annexes to the main building (board room, winter synagogue, baths, office, candle room, mourning room, rabbinate, etc.), and make sure to go downstairs to visit the treasure chambers, which house some lovely items such as precious 16th-century manuscripts and gold-threaded tapestries, among other things. You can also see a number of books belonging to the oldest Jewish library in the world!