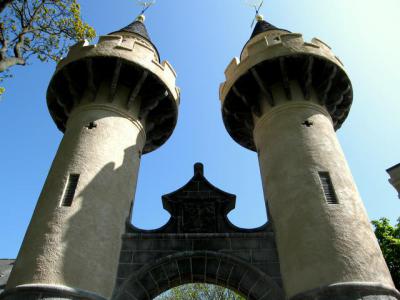 Just south of King's College and across High Street lie the Powis Gates, an impressive and imposing archway with a Near Eastern influence demonstrated in its 'minaret' towers. These were erected in 1834 by Hugh Fraser Leslie of Powis, the owner of an estate which formerly lay behind them. The Fraser Leslie Arms are visible on the obverse of the arch, with a shield on the reverse showing the bust of three black men - a link to the family's involvement in a grant of freedom made to their slaves in Jamaica. The entrance now leads to the University's Crombie-Johnston Halls of Residence.

This sight is featured in a self-guided walking tour of Aberdeen, Scotland within the mobile app "GPSmyCity: Walks in 1K+ Cities" which can be downloaded from iTunes App Store or Google Play. Please download the app to your mobile phone or tablet for travel directions for visiting this sight. The app turns your mobile device to a personal tour guide and it works offline, so no data plan is needed when traveling abroad.

Throughout Aberdeen you can find a number of places to have a great night out. Clubs offer any type of music you could want: rock, pop, dance, techno, and live performances. This tour takes you to the most popular nightclubs in Aberdeen.

Museums and Galleries Tour in Aberdeen

Aberdeen has many museums in its center that specialize in local history. Galleries give visitors the opportunity to enjoy and appreciate the works of local artists and to learn about the city's cultural richness. Take this tour to discover the offerings of Aberdeen's museums and galleries.