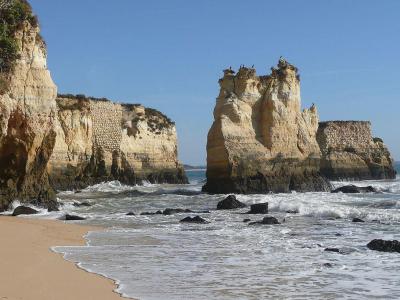 Praia do Pinhão is a relatively small beach, quite calm and cozy, compared to Praia da Batata. Pinhão is also very cute – some reckon it is one of the most beautiful beaches in Lagos. Surrounded by picturesque rock formations extending into the sea, the bay is well protected from strong winds.

There are relatively few facilities on Pinhão, which also adds to its charm. The sand is a bit hard and coarse, but the water is clear and suitable for swimming, although a bit cold at times. Overall, the conditions here are excellent for diving and snorkeling, hence the number of divers gathering often. During high tide there is a spot on the left side where you can go cliff jumping. Otherwise, it is ideal to get tan in a tranquil setting.

Praia do Pinhão consists of two parts. The first part is a small strip of sand, underneath the staircase, which is completely swallowed by sea during high tide. The second part, on the other side of the rock formation, is larger and has a lot of stones in the water – placed there since the Praia da Dona Ana reconstruction in 2015. There is a tunnel in the rocks connecting both sides of Praia do Pinhão, which can be used only in low tide.

You can access Praia do Pinhão via a long staircase with a series of terraces built into the cliffs. During high tide, you can jump from the staircase straight into the sea, but beware of shallow water. Above the staircase, there is a viewpoint affording tremendous view.
Image by Paul Stephenson on Wikimedia under Creative Commons License.