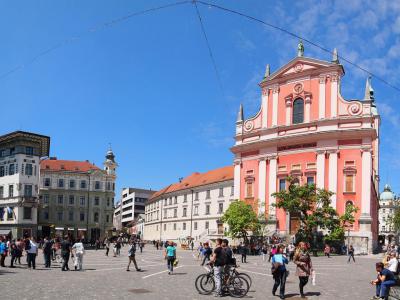 Prešeren Square is known as a meeting place for festivals, sporting events, concerts, and political events. The square was originally known as St. Mary's Square and developed after the Franciscan Church was built in the 17th century. After the 1895 earthquake, architect Max Fabiani designed the square as a hub. Newly built palaces replaced the medieval houses that were destroyed by the earthquake.

Landmark palaces include the 1873 Hauptmann House, which was renovated in Secessentionist style in 1904. The Mayer department store, Urbanc House, Seunig House, and Frisch House are other important buildings in the square.

The square's circular design and granite block pavement were added in the 1980s. The square is now pedestrian-only.

The square is named after Slovene national poet France Prešeren. The influential poet lived in Ljubljana in the 1800s, wrote in Slovenian, and is considered one of Europe's great Romantic poets. A bronze statue featuring Prešeren with the muse of poetry is located in the square. The Prešeren statue faces a statue of his love, Julija Primic, mounted on a building across the square. Three birches were planted behind the monument to indicate Ljubljana's energy center.

A bronze scale model of Ljubljana was added to the square in 1991. The square is also now home to many cafes and restaurants.

Prešeren Square is the most important and visited square in Ljubljana. This vital square features beautiful architecture and a central meeting point for visitors and locals alike.

This is a beautiful place to take photos and listen to street musicians. Visit at dusk to get a magical perspective of this vibrant city.
Image Courtesy of Wikimedia and Tiia Monto.