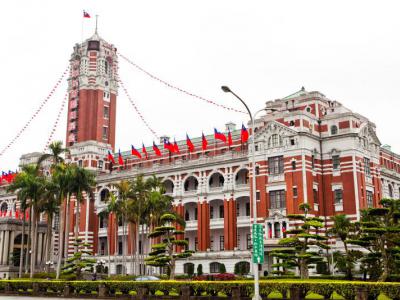 The Presidential Office Building is the highest authority building in Taiwan. It has four ground floors, one underground floor, and a whopping ten entrances. The total number of rooms in the building is about 300, most of which are used as business offices. A section of the building is opened to the public on weekdays during specific daytime hours.

Designed by architect Uheiji Nagano during the period of Japanese rule of Taiwan (1895–1945), the structure was damaged in Allied bombing during World War II and was restored after the war by Chen Yi, the Governor-General of Taiwan Province. It became the Presidential Office in 1950 after the Republic of China lost control of mainland China and relocated the nation's capital to Taipei at the end of the Chinese Civil War. At present, this Baroque-style building is a symbol of the ROC Government and a famous historical landmark in downtown Taipei.

Tip:
To take a free tour (circa 60-90 mins), go around to the side entrance and line up to go through security check first (passport/bags).
Once inside, be sure to ask politely if you are allowed taking photos in some areas (video strictly forbidden anywhere).
At the end, there's a nice small gift shop full of souvenirs and a spot where you can buy specialty stamps.

Opening Hours:
Mon-Fri: 9–11:30am
Image by Kamakura on Wikimedia under Creative Commons License.
Sight description based on wikipedia