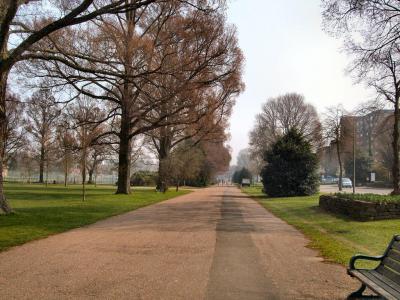 It is one of Brighton's largest parks, with 63 acres of lawns, formal borders and rose gardens, bowling greens, tennis courts and a small pond. It was bought in 1883 by Brighton Corporation from Mr William Bennett-Stanford who owned the Preston Manor estate and had begun to develop the park as enclosed pleasure grounds. The costs of the purchase and initial layout were funded with a bequest of £70,000 from a local bookmaker, William Edmund Davies in 1879. The park was formally declared open on 8 November 1884. The park remains green throughout the summer because of a non-drinkable underground water source, known as the Wellesbourne, which runs below Preston Park, London Road and The Level. The park is host to various annual events including the festival at the end of the Brighton & Hove Pride parade, the start of the Brighton Marathon, a circus during the Brighton Festival and a large starting event for the Take Part sports festival. Opposite the park, across the main London Road, is The Rockery—the largest municipal rock garden in Britain built up the side of a steep railway embankment.
Image by Paul Gillett on Wikimedia under Creative Commons License.
Sight description based on wikipedia