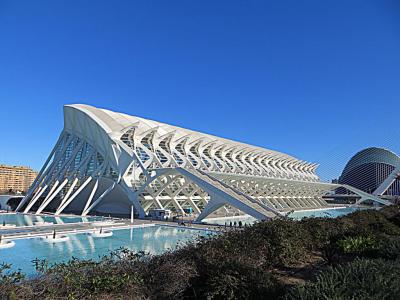 The Museu de les Ciències Príncipe Felipe, Anglicised as "Príncipe Felipe/Prince Philip Science Museum") is an important tourist attraction in Valencia. It is part of the City of Arts and Sciences, and can be found at the end of Luis García Berlanga street. Its director is Spanish science writer and television personality, Manuel Toharia.

The building was designed by Santiago Calatrava and was built by a joint venture of Fomento de Construcciones y Contratas and Necso. It opened on 13 November 2000. It is over 40,000 square meters in area and resembles the skeleton of a whale.

Everything in the museum is graphically displayed recent exhibitions have included subjects as diverse as spy science, climate change, the human body and biometrics.
Image Courtesy of Wikimedia and Mister No.
Sight description based on Wikipedia.

Tour Duration: 2 Hour(s)
Travel Distance: 3.0 Km or 1.9 Miles
Where To Stay in Valencia, Spain - Guide of Best Areas and Hotels