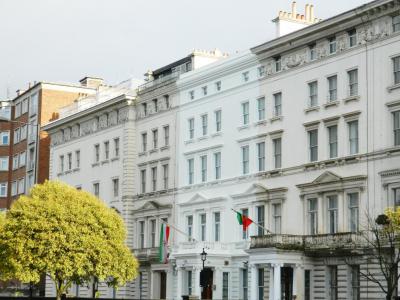 Running adjacent to Kensington Road on the south side, separated by a high wall, is Prince's Gate. It was named after a gate into Hyde Park, opened in 1848 by Edward VII, the then Prince of Wales. In 1855 some stuccoed terraces were built opposite it, facing Kensington Road. The whole terrace is recorded in the National Heritage List for England as a designated Grade II listed building.

Several notable people lived in Prince's Gate too. Field Marshal Douglas Haig lived and died at No. 21 in 1928; Robert Baden-Powell, founder and first Chief Scout of the world-wide Scout Movement, lived at No. 32 in 1903–14; and Joseph Chamberlain, a famed British statesman, lived at No. 72 in 1880–2. No. 14 was the home of Joseph Kennedy when he was the American ambassador to Britain in 1937–40, accompanied by his son John F. Kennedy.
Image Courtesy of Wikimedia and Paasikivi.