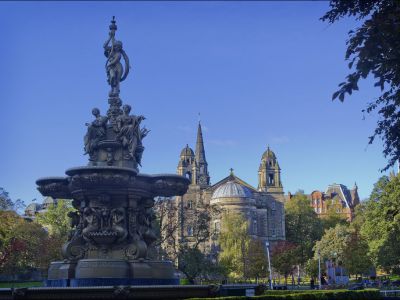 Between Edinburgh Castle and Princes Street, renowned for its superb shops, pubs and restaurants, lies the beautiful Princes Street Gardens, a haven of peace and beauty in the heart of the city.

A 110,000 years ago the area that is now the gardens was formed by glacial erosion, when the basalt bulk of Castle Rock caused a glacier to divide around it, forming a depression at the foot of the rock. For thousands of years the area had been marshland, and when people came to the region, it formed a natural defence at the foot of Castle Rock; it has been inhabited since the 9th century BC.

King James III ordered the marsh to be flooded in 1460 to add to the defences of the Old Town and Edinburgh Castle. The flooded area was named Nor Loch and dominated the area until it was drained in 1759; although the vicinity sometimes gets flooded even today.

When the New Town was under construction, millions of tons of earth were dumped in the former loch and this eventually became The Mound, upon which many prestigious buildings stand today. The gardens were created in 1820; on the east side of The Mound they cover an area of 8.5 acres and on the west side they take up 29 acres.

The most important monument in the gardens is the Scott Monument, and there are a lot of statues dedicated to John Wilson, David Livingstone, and Allan Ramsey, among others. There is a play area for children, lush lawns and spreading trees, lots of benches, kiosks and a café.

In the weeks leading up to Christmas and into the New Year, the park hosts fairground rides, the city’s main Christmas Market and an ice-skating rink.
Image Courtesy of Flickr and dun_deagh.