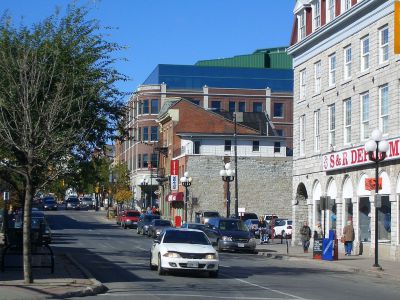 Princess Street is a major arterial road in Kingston, Ontario, Canada. As the main retail street of downtown Kingston, it is lined by many historic limestone buildings such as St. Andrew's Presbyterian Church, served as first meeting place of the Board of Trustees of Queen's College, The Commercial Mart Building, served as an army barracks, a public works building and a store, The Grand Theatre, serving as the home of the Kingston Symphony etc.
Princess Street begins at Kingston's current western city limits in Westbrook (continuing from Main Street, Odessa) and ends at the downtown waterfront east of Ontario Street.
The area at the intersection of Princess and Division Streets is known as The Hub. This area is known for its numerous bars and nightclubs that cater to the student population.
Image Courtesy of Wikimedia and Chensiyuan.
Sight description based on Wikipedia.