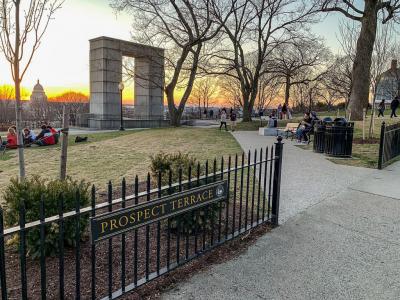 A statue of theologian Roger Williams was built in the late 1930s after Williams' descendant Stephen Randall made a deed of gift for the monument. The 35-foot stone statue commemorates Williams' founding of the state of Rhode Island and his promotion for religious freedom. The statue depicts Williams gazing over the city.

In 1939, Roger Williams remains were moved into a tomb that lies directly beneath the statue. His body had been overgrown by the roots of an apple tree next to his original grave. The roots grew over the form of his body, so that it looked identical to a human form. The remainder of his bones were reburied in a bronze casket and placed beneath his statue in Prospect Terrace. The so-called "William's Root" is preserved and is now on display at the John Brown House Museum on the East Side of Providence.
Image by Infrogmation on Wikimedia under Creative Commons License.
Sight description based on wikipedia

This sight is featured in a self-guided walking tour of Providence, Rhode Island within the mobile app "GPSmyCity: Walks in 1K+ Cities" which can be downloaded from iTunes App Store or Google Play. Please download the app to your mobile phone or tablet for travel directions for visiting this sight. The app turns your mobile device to a personal tour guide and it works offline, so no data plan is needed when traveling abroad.