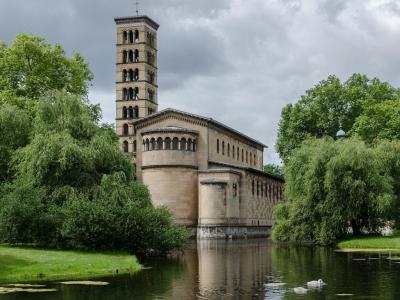 The Protestant Church of Peace (German: Friedenskirche) is situated in the Marly Gardens on the Green Fence in the palace grounds of Sanssouci Park. The church was built according to the wishes and with the close involvement of the artistically gifted King Frederick William IV and designed by the court architect, Ludwig Persius. After Persius' death in 1845, the architect Friedrich August Stüler was charged with continuing his work. Building included work by Ferdinand von Arnim and Ludwig Ferdinand Hesse also. The cornerstone of the churchhouse was laid on April 14, 1845. The building was dedicated on September 24, 1848, though construction continued until 1854. The structure resembles a High Italian monastery.

The church is a columned basilica with three naves and no transept, with a free-standing belltower. The 13.5 m high central nave overlaps the side aisles, which are half as wide. An arcade of central arches mark the crossing point. An etching of the Basilica di San Clemente in Rome made by early Christians resembles a draft design of the Potsdam church.

An original Venetian mosaic from the early 13th century decorates the church's apse. It was originally in a church in San Capriano on Murano, Venice until its abandonment. While he was crown prince Frederick William had it bought at auction for 385 thalers and brought to Potsdam by canal.
Image by Wolfgang Staudt on Wikimedia under Creative Commons License.
Sight description based on wikipedia