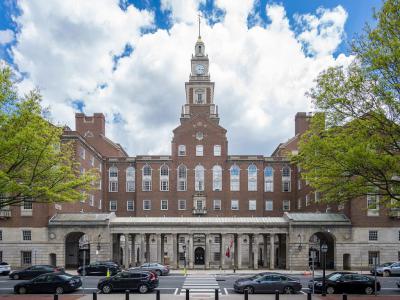 The Providence County Courthouse (also known as the Frank Licht Judicial Complex) is a Georgian Revival building in the College Hill neighborhood of Providence. The building contains the state's court of last resort, the Rhode Island Supreme Court, and the local trial court, the Providence County Superior Court.

The lot currently occupied by the courthouse has been used for governmental and judicial purposes since the since the 18th century. In 1794, the city purchased a building at the southern corner of College and Benefit Streets originally built in 1723 by the First Congregational Society for use as a meeting house. Known as the "town house," this building hosted public meetings and was occasionally used as a courthouse.

In March of 1875, the property was condemned and a city commission began work to construct a new public building at the site. The resulting courthouse, was designed by Stone & Carpenter in the High Victorian Gothic style. Work on the structure began in July of 1875 and was completed in December of 1877.

The current building was constructed in 1923. The building is constructed from red brick with granite and limestone trim. The exterior of the building is designed in the Georgian Revival style while the interior follows an iteration of the Federal style.

The Providence County Courthouse is lauded for its contextualism, which defers in its design to the buildings surrounding. Architectural historian McKenzie Woodward commends the fragmentation of the building's large mass into "visually digestible units".
Image Courtesy of Wikimedia and Kenneth C. Zirkel.
Sight description based on Wikipedia.