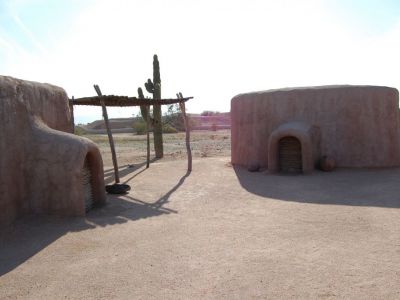 Pueblo Grande Ruin and Irrigation Sites are pre-Columbian archaeological sites and ruins, located in Phoenix. They include a prehistoric platform mound and irrigation canals. The City of Phoenix manages these resources as the Pueblo Grande Museum Archaeological Park

Long before Euroamericans moved into the area that is now Phoenix, it was home to a thriving civilization called Huhugam by the culturally affiliated O’odham and the Hohokam by archaeologists. These Ancestral Native Americans created the archaeological structures preserved at Pueblo Grande.

Pueblo Grande features a large platform mound with retaining walls. This massive structure contains over 20,000 cubic meters (yards) of fill. There were also many dwellings, and at least three ball courts.

The Hohokam archaeological culture developed some of the largest and most advanced canal systems in all of pre-Columbian North America. They were the first people to practice irrigated agriculture in the region. The remnants of their irrigation canals are part of the archaeological site at Pueblo Grande.

Pueblo Grande was occupied from approximately A.D. 450 to 1450, at which time it was abandoned like many other villages throughout the Phoenix basin. The reasons why these ancestral Native Americans left their villages and irrigation systems are widely debated among archaeologists. There are many competing hypotheses that include floods, droughts, warfare, and disease.
Image Courtesy of Wikimedia and Offworlder.
Sight description based on Wikipedia.