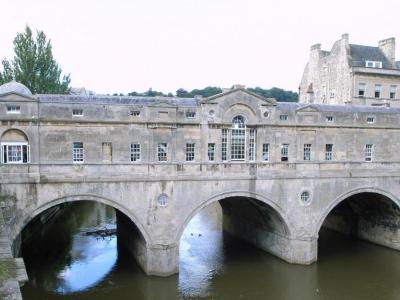 Bath is a city of unique landmarks, and none are more recognizable than the Pulteney Bridge. Depending on who you trust, there are only one, two, or three other bridges in the world that are lined with shops. Whatever the exact number is, there certainly aren't many others like it.

The bridge opened in 1774 and was designed by Robert Adam. The bridge was the brainchild of William Johnstone Pulteney, who named it after his wife, Frances. His vision was to create a new town nearby, but he needed a grand bridge to connect it to Bath. Adam's design was drafted in the Palladian style, harking back to the 16th-century Venetian architect Andrea Palladio.

The Pulteney Bridge is a World Heritage Site and an English Grade I Listed Building. You will find restaurants of various cuisines, independent shops, and Bath Rugby Club's official store along the bridge. The roadway is a busy thoroughfare through Bath to this day.

The best views of the bridge are actually from the south side, either from the Parade Gardens or the Beazer Garden Maze.

To the south, the River Avon flows over the crescent weir. The shops on the north side were heavily altered and expanded by these owners in the 18th and 19th centuries. Their cantilevered floorplans show in stark contrast to the beautiful Georgian stone bridge as viewed from the south.
Image by Steve Cadman on Flickr under Creative Commons License.