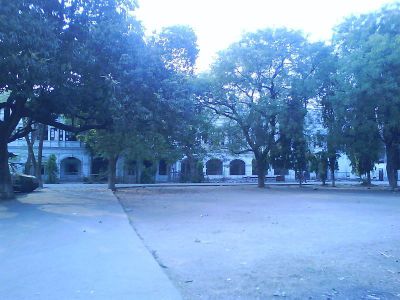 Purani Haveli is a palace located in Hyderabad. It was the official residence of the Nizam. It was also known as Haveli Khadeem, which means old mansion, was constructed for Sikander Jah, Asaf Jah III (1803–1829) by his father Ali Khan Bahadur, Asaf Jah II.

The 2nd Nizam Mir Nizam Ali Khan had taken over this from Rukunudhaulah of the Momin dynasty, in 1717. The main building is a symbol of 18th century European architecture. Sikander Jha lived here for some time and later shifted to Khilwat Mahal. Due to this, these buildings are called Purani Haveli. In this building complex, Ayina Khaana (Mirror House) and Chini Khaana (Chinese Glass House) were constructed. Now the South Zone Deputy Commissioner of Police (Hyderabad) and South Zone Task Force Police Addl DCP offices are being functioned here.

The Haveli is "U" in shape, with two oblong wings running parallel to each other and the residential palace located perpendicularly in the middle. The main building resembles 18th-century European palaces. A unique feature of this palace is the world's longest wardrobe, built in two levels with a hand-cranked wooden lift (elevator) in place. This occupies the entire length of one wing of the palace.
Image Courtesy of Randhir.
Sight description based on Wikipedia.