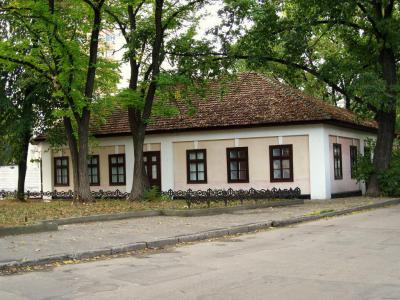 The great Russian poet Alexander Pushkin was exiled to Bessarabia (nowadays Moldova) for three years by the tsarist administration. He arrived in Chisinau on September 21, 1820, and stayed at the house of General Inzov, which today hosts the museum of Pushkin and is one of only two remaining Pushkin houses in the world; the other being is at Moika, St. Petersburg, Russia. Over the three years that Pushkin spent in Bessarabia, he had written a number poems, including the first part of the world-famous "Eugeny Onegin" and many others.

While in Chisinau, Pushkin maintained close ties with the local cultural elite: the writer Constantin Stamati, the Donici family, and other classics of the Romanian literature. The museum holds a collection of materials related to Pushkin's life in Bessarabia such as prints, paintings, sculptures, decorative art pieces from the late XVIII-XIX centuries, as well as editions of some of his works written here.

Opening Hours:
Tue-Sun: 10am-4pm
Tours are offered in Russian, Romanian, English.
Information about the exhibits is in Russian / Romanian.
Image by Alexander Murvanidze on Wikimedia under Creative Commons License.

This sight is featured in a self-guided walking tour of Chisinau, Moldova within the mobile app "GPSmyCity: Walks in 1K+ Cities" which can be downloaded from iTunes App Store or Google Play. Please download the app to your mobile phone or tablet for travel directions for visiting this sight. The app turns your mobile device to a personal tour guide and it works offline, so no data plan is needed when traveling abroad.

Alexander Bernardazzi, the Russian architect of Swiss descent, was the chief architect of Chisinau from 1856 until 1878. His work marked the dawn of a new architectural era in the city. Although during his life Bernardazzi created more than 30 buildings, very few of them have survived until our days. This tour offers a unique opportunity to see some of the beautiful creations of Alexander...  view more

Perhaps one of the things adults and kids equally enjoy is going to museums. Those interested to learn about Moldova's past and appreciate the creativity of the Moldovan people should definitely explore Chisinau's museums and galleries. It also may be a good idea to mingle with the people of art at some of their hangout places.

Ever wondered what it is like living in Chisinau? Well, now you have the chance to find out. Visit the Afghan War Memorial to Sons of Motherland, see where and how kids and students receive "occupational guidance", or unwind at the local park. Follow this walking tour to discover the daily life of Chisinau's Riscani district.

Chisinau is the capital of Moldova, the country sandwiched between Ukraine and Romania in Eastern Europe, which had for many years been part of the Russian Empire and then the Soviet Union until it finally got independence in 1991. Moldovan culture and language are deeply rooted in the Roman tradition. Just like the eternal city of Rome itself, Chisinau rests on 7 hills in the valley of the River...  view more

Strong faith and love for God the Moldovans have kept for centuries are well reflected in the numerous churches found in Chisinau. This self-guided tour will take you to the places of worship located in the city center. Whether to enjoy the architecture or attend the service, these churches are well worth visiting all the same.

Known as the "Green Capital", Chisinau traces its history to 1436, it represents the cultural, economic and political center of Moldova. Stefan cel Mare Blvd is one of the oldest and most prominent streets in the city, here you will find a lot of beautiful churches, fine architectural pieces, important historic sights, as well as tranquil and picturesque parks. Be sure to visit some, if...  view more