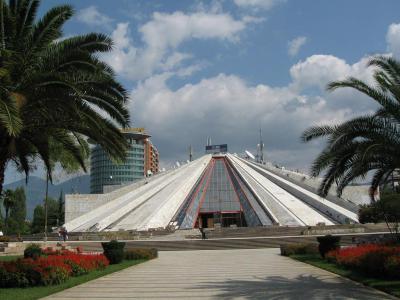 The Pyramid of Tirana is a structure that has served as a cultural center, museum and NATO base. It first opened in 1988 and closed in 1991 after the collapse of communism in the country.

The first museum held in the pyramid was the Enver Hoxha Museum. It showcased the legacy and history of Enver Hoxha, leader of Communist Albania who died in 1985. Designed in part by Hoxha's daughter, Pranvera Hoxha, it was the most expensive building ever built in Albania.

After the fall of communism, The Pyramid was briefly used as an exhibition center. It became a base of operations for NATO in 1999 during the War in Kosovo. Most of the pyramid has remained empty and has experienced some vandalism. There were plans to demolish the structure in 2017, but protests from citizens led to preservation and renovation instead.

The Pyramid is currently undergoing refurbishment so that it may be used as an IT center for youth. The TUMO Center, its new name, will give young people education on computer programming and robotics. It is also used as a broadcasting center for Top Channel and Top Albania Radio.
Image Courtesy of Wikimedia and David.r.1929.