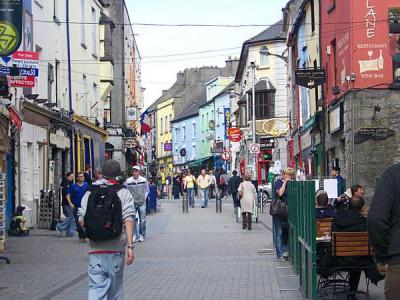 Galway has been described as "Rustically Modern." That may be taken to mean a mix of medieval scenery and superb food. Having said that, this quality is most observable on Quay Street. Quay street is lively. Window shopping, people watching, pub crawling, fine dining and zany nightlife are recommended.

Quay Street is one street in several parts. It is one street, yes, but it changes names. It also varies in width from normal street to narrow lane. From Eyre Square to Shop Street, most of the people are locals, students, some tourists.

The street goes from Shop Street to Mainguard Street. After a bit Mainguard branches off toward O'Brien's Bridge. We continues to the High Street part and finally, Quay Street to Wolfe Tone Bridge. But it's all just Quay Street, you see. It's simple really.

At the north end, the top, it is wider and very retail. There are two malls, actually joined together, Eyre Square Mall and Corbet Court. In the malls there are about 100 stores and lots of places to eat. Very fine, but a bit of sameness to it all.

At the start of the tour there is The Kings Head Pub of 1649. It is so named because one of the original owners was the executioner of Charles I. Who was it? Maybe it was Colonel Peter Stubbers of Cromwell's army. Peter seized the mayor's house on High Street, which later became the Kings Head Pub. Peter denied everything.

Moving on, encounter the Galway Woolen Market. Ever hear of Irish wool? Here it is. Bookstores back-to-back appear often. Bars aplenty like Feeney's Bar, Malloy's Irish Whiskey, the Quay Street Pub and so on. The actual "Latin Quarter" is less than 400 feet long. There are more pubs, live music, shops, hotels, theaters.

At last there is the waterfront area, called the Corrib. Here is the Spanish Arch, once attached to the wall that protected Spanish merchants from those wild and crazy Irish. Just kidding.
Image Courtesy of Wikimedia and Trish Steel.