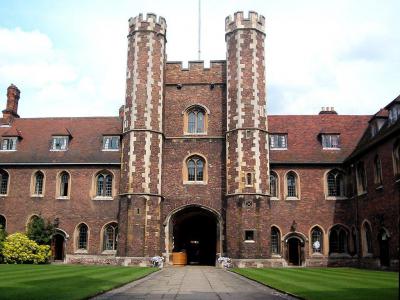 Queens’ College is the southernmost in the chain of prestigious colleges which line the east bank of the river Cam. It is one of only two colleges in this chain (the other being St. John’s College to the north) to have buildings on either side of the river. The two sides of the campus – known as the ‘light’ and ‘dark’ sides by students – are connected by the college’s famous wooden Mathematical Bridge, one of Cambridge’s most famous structures. Sitting adjacent to Silver Street, the college’s medieval buildings are perhaps the most accessible in the city. The oldest building on the river Cam belongs to Queens’ – the President’s Lodge, a Tudor-style structure completed in 1460.

Queens’ College is so named as it was founded by the respective queens of Henry VI and Edward IV. The college was first founded in 1448 and then re-founded by Elizabeth Woodville, wife of Edward, in 1465. It is one of the oldest and largest colleges within Cambridge University, and one of the most academically successful. The large Queens’ campus encompasses modern and medieval buildings which can be viewed along the length of Silver Street. Queens’ College is a progressive, social institution that has produced a variety of famous alumni, including the renowned philosopher Erasmus, Oliver Cromwell and, more recently, actor and author Stephen Fry.

Why You Should Visit:
For just a few £s you can enter and walk all around the courtyard, Tudor Gatehouse, the Old Hall and many of the courts, including the Old Court - which apparently is much the same as it was in the 15th century.

Tip:
Do cross the Mathematical Bridge and become photography subject(s) for the tourists :)
Image by Azeira on Wikimedia under Creative Commons License.