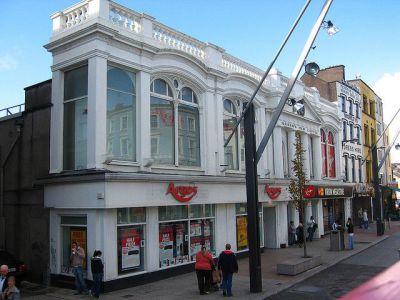 Contrary to its name, Queen’s Old Castle is actually a departmental store. What is interesting to know, is that it actually stands on the site of the King’s Castle, a fortress designed to protect the port of Cork. Historical records state that the site was known as the King’s Castle from 1206 to 1835. In 1835, William Fitzgibbon, developed the site into a departmental store and named it Queen’s Castle, perhaps in honor of Queen Victoria.

Queen’s Castle continued serving people of Cork as a department store until 1978 when it was closed for refurbishment. It reopened in 1980, as Queen’s Old Castle Shopping Centre with 37 shops and restaurants, which made it very popular until the recession hit markets in 1990 and closed down many shops. The site had an interior revamp in 1997 and opened as an outlet for Argos and Virgin Music Megastore around the January of 1998. Having seen owners like Brown Thomas Ltd and Primark, visitors like Joe McCarthy and Roy Keane, and also the burning of Cork in the 1920s, Queen’s Old Castle has quite a history to tell its current day visitors.

Standing on Grand Parade, this architectural beauty has twenty eight Corinthian columns which are twenty-six feet high and a Greek Doric break front. This site has been a Castle, a jail, a courthouse, then a department store and even a shopping centre, and is definitely to be visited if you are in Cork.
Image by mink on Flickr under Creative Commons License.