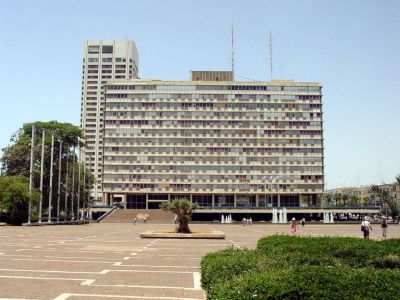 Rabin Square is a popular tourist destination in Tel Aviv. This Square is located on Ibn Gabirol to the south of City Hall. Previously known as the Kings of Israel Square, it was renamed Rabin Square when Yitzhak Rabin, Prime Minister was murdered here in a rally on November 4th, 1995.

To the south of the square, you can find the monument of Holocaust and rebirth sculpted by Yigal Tumarkin. Made of glass and rusty metal, this monument is in the shape of an inverted pyramid.

A monument in memory of Yitzhak Rabin is found on the north-east corner of the square. All the main rallies of the city are held here including the Independence Day celebrations, open electoral rallies, concerts and demonstrations.

To the north of this square lies the City Hall building designed by Menachem Cohen, the famous architect. You can find Frischmann Street to the south of the square and Ibn Gabirol Street to the north. Hen Boulevard designed by architects Alexandroni and Yaski in 1964 lies to the west of Rabin Square.

Tip:
Pick your time to coincide with the many public demonstrations that are scheduled to give an outlet to the disparate political and social issues that percolate through Israeli society.
Image by Cccc3333 on Wikimedia under Creative Commons License.

This sight is featured in a self-guided walking tour of Tel Aviv, Israel within the mobile app "GPSmyCity: Walks in 1K+ Cities" which can be downloaded from iTunes App Store or Google Play. Please download the app to your mobile phone or tablet for travel directions for visiting this sight. The app turns your mobile device to a personal tour guide and it works offline, so no data plan is needed when traveling abroad.

This self-guided tour takes you through one of the oldest port cities on the Mediterranean coast, whose first written record dates back to the 15th century BC. Although integrated with Tel Aviv, its style is quite different – a place to explore in the daytime and after dark. Famous for its ancient slate houses and narrow winding stone roads, it feels a little similar to some ancient cities and...  view more