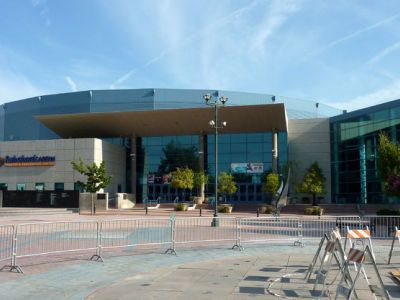 In 1998, the facility was again modified. The parking lot, located east of the facility, was removed for the construction of the 10,000-seat sports arena. The combined complex was renamed the Centennial Garden and Convention Center. Incorporated in the design of the sports complex was a connection to the exhibit hall. This unique feature allows for the convention center to be used as a staging ground or warm-up facility for events being held in the arena. The entire complex was renamed seven years later, Theater and Convention Center.
Image Courtesy of Wikimedia and Bobak Ha'Eri.
Sight description based on Wikipedia.