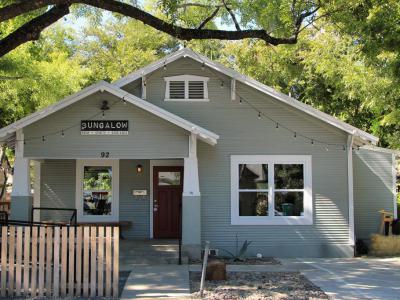 The Rainey Street Historic District is a street of historic homes, many of the bungalow style, positioned near Lady Bird Lake and Interstate 35 in the southeast corner of Downtown. Though 21 buildings are specifically identified as a part of the historic district, the stretch of Rainey between River and Driskill includes 31 buildings constructed before 1934, giving the neighborhood a historic character relative to other areas of the city.

The Rainey Street neighborhood was first developed in 1884 by cattle baron Jesse Driskill and Frank Rainey, who subdivided 16 acres of land between the Colorado River and Water Street (now known as Cesar Chavez Blvd.) The neighborhood was initially populated by white, middle class tradesman, though by the 1920s the area began to see a larger influx of working class families and ethnic minorities. Many of the original homes in the neighborhood were lost to a flood in 1935. The construction of Interstate 35 left the Rainey Street neighborhood "isolated" from the remainder of Austin's residential areas; by 1978, a report estimated that more than half of the structures on Rainey Street were "dilapidated". In 1985, amid fears of high-density commercial and residential redevelopment, the neighborhood was added to the National Register of Historic Places.

Since the early 2010s, this formerly sleepy, tucked-away residential street has turned into an increasingly popular nightlife district. The majority of historic bungalows here have been renovated into bars and restaurants, many of which feature large porches and outdoor yards for patrons.

Why You Should Visit:
Austin's diverse culture is not just contained in a museum but sprinkled throughout the entire city.
This residential-turned-commercial row offers a good chance to appreciate the city's lively scene manifested in the wealth of upscale bars, eateries and food trucks galore.
Staying true to Austin's roots, this strip of bars often features live, local bands.
Image by Larry D. Moore CC BY-SA 3.0. on Wikimedia under Creative Commons License.
Sight description based on wikipedia