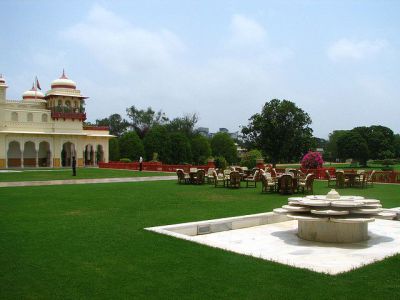 The Rambagh Palace is the former residence of the Maharaja of Jaipur and now a luxury Taj Palace Hotel, located 5 miles (8.0 km) outside of the walls of the city of Jaipur on Bhawani Singh Road. Preferred by celebrities and sport stars across the globe, Rambagh Palace, is widely considered to be one of the best hotels around the world.

The first building on the site was a garden house built in 1835 for the wet nurse of prince Ram Singh II. In 1887, during the reign of Maharaja Sawai Madho Singh, it was converted into a modest royal hunting lodge, as the house was located in the midst of a thick forest at that time. In the early 20th century, it was expanded into a palace. Maharajah Sawai Man Singh II made Rambagh his principal residence and added a number of royal suites in 1931.

After India became independent and the princely states united, the Palace became the Government House. By the 1950s, the royal family felt that the upkeep of the palace and its 47 acres (190,000 square meters) of gardens was becoming very costly. They, therefore, decided in 1957 to convert it into a luxury hotel.