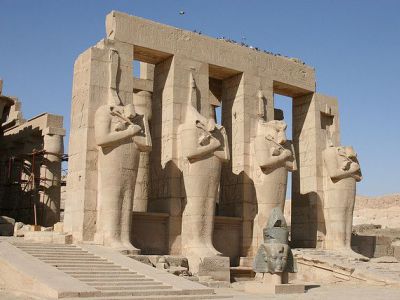 The Ramesseum was the mortuary temple for Ramses II, one of the best known and longest ruling pharaohs of ancient Egypt. The reign of Ramses II was marked by the construction of many of the 18th dynasty’s finest buildings and monuments, and the Ramesseum was one of its greatest architectural feats. Known in its time as the “Million Years Temple”, perhaps in recognition of its immense size, the temple took 20 years to build. Originally there were two colossal statues of Ramses II at the entrance to the temple, these have since collapsed, but you can see parts of them throughout the complex.

The temple was designed around two supporting walls with an extensive corridor between them, where statues of sphinxes, similar to those found at the Luxor Temple, were present. There are also impressive Oriside columns, which feature Ramses II transforming into Osiris, god of the underworld. These columns are in an excellent condition and still feature much of the original coloring and detail, depicting scenes from the Upper and Lower Kingdoms of Ancient Egypt. At the eastern end of the Ramesseum there are scenes of the pharaoh’s alliance with the Hittites, one of his major achievements in Asia over a 15 year period. Friezes on the entrance pylon clearly show the Ramses II army on the move during military campaigns.
Image Courtesy of Flickr and zoonabar.