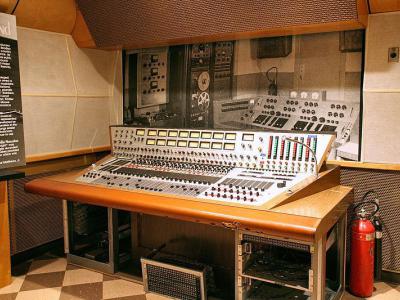 RCA Studio B, Nashville (must see)

The only way to visit Music Row's famous RCA Studio B, where Roy Orbison, Dolly Parton, Elvis Presley, and Hank Snow once recorded, is to buy your ticket at the Country Music Hall of Fame (i.e. the museum's box office) and either walk or hop on the guided tour bus. The visit takes about an hour and is an additional fee, but comes as part of a package with admission to the Hall of Fame.

RCA Studio B became famous in the 1960s for being a part of what many refer to as the Nashville Sound. According to Chet Atkins, plans for it were drawn up on a napkin by Bill Miltenburg, RCA's chief engineer and recording manager. The area of the studio and control room has a 2nd story containing an echo chamber; also, an addition was built to provide office space and rooms for tape and lacquer mastering. In 1977, the "B" was made available to the Country Music Hall of Fame for tours, and in 1992 it was donated to the same by the late Dan Maddox. Until 2001, it was operated as an individual attraction when the new home for the Hall of Fame was built in downtown Nashville.

Why You Should Visit:
This is a really cool guided tour (about as good as it gets) you can add on to your visit at the Country Music Hall of Fame.
See the piano that Elvis recorded on, and antique recording equipment... all having an unique aura about them.
Obviously, you can also learn the process of recording live music and producing records.

Tip:
Tours sell out quickly so make an online reservation early or go first thing in the morning to get a tour time.
Remember to use the facilities inside the Country Music Hall of Fame because you won't find a bathroom at the studio.