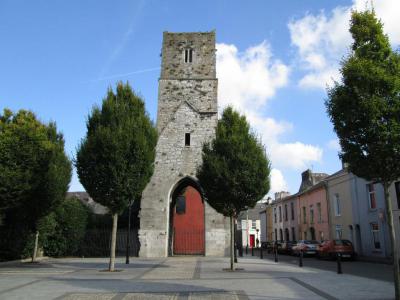 The Red Abbey in Cork, Ireland was a 14th century Augustinian abbey which took its name from the reddish sandstone used in construction. In late 13th or early 14th century, an Augustinian monastery was built in Cork, and was occupied by the friars until at least the rebellion of 1641, and possibly as late as 1700. The abbey tower was used by John Churchill (later the Duke of Marlborough) as a vantage point and battery during the Siege of Cork in 1690. The siege sought to suppress an uprising in the city and its association with the expelled Catholic King of England, James II. In the eighteenth century, the Augustinian friars established a new friary in Fishamble Lane, and the Red Abbey was turned over to use as a sugar refinery. However, a fire in the refinery destroyed much of the abbey's structure in 1799. All that remains today of the structure is the bell tower of the abbey's church. The tower is designated as a national monument and maintained by Cork City Council.
Image by JohnArmagh on Wikimedia under Creative Commons License.
Sight description based on wikipedia

The history of Cork is grand with great periods, ancient and present. This is reflected in the City's architecture and sites. One of Cork's originally preserved medieval sites is Red Abbey. This tour will take you to some of the City's greatest places, ancient and new.