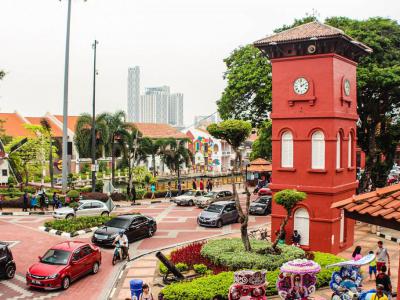 The Red Clock Tower, otherwise known as Tan Beng Swee Clock Tower, is a 134-year-old clock tower located in Dutch Square. It is one of the most popular spots for tourists in Melaka.

The 50-foot tower was built in 1886 by Tan Jiak Kim, a Peranakan Chinese philanthropist who wanted to fulfill the wishes of his father Tan Beng Swee, who dreamed of a clock tower in the heart of Melaka. Tan Jiak Kim built the clock tower at the Stadthuys building where it would be most prominent.

The red color of the tower blends well with the Stadthuys, particularly with its contrasting white shutters. However, the design is not meant to reflect the Dutch Colonialism architecture of City Hall. Rather, it was constructed in Britain using a Portuguese design, present in a clock tower that previously sat in the same spot.

The four clock faces use Roman numerals to mark the time. They have continued functioning without stopping for more than 100 years due to regular cleanings and maintenance. The clock tower also features a predatory bird sound system, that deters crows and pigeons.

The Red Clock Tower is designated as a UNESCO World Heritage Site.
Image Courtesy of Wikimedia and Natalie.Thoo.